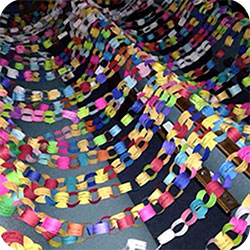 “When someone goes to jail, most people don’t tell anybody. They don’t really talk about it,” says Gina Brockmeyer, program coordinator of Women’s Ministries at Kairos Prison Ministry International, Inc., DeBary. Laura Roll was one of those people. Working in law enforcement when her son was first incarcerated, there was no one to talk to about what she was going through. It was lonely and stressful.

When she registered at Sts. Peter and Paul Parish in Winter Park, she checked the box under interests that listed “Prison Ministry”. The next thing she knew, she had been invited to a Kairos Outside weekend. “I was trying to figure out if I really wanted to do this,” she recalled. After driving to check out the location, she drove around, trying to put off actually attending. Although nervous, she finally parked and went inside.

“Well, it was the best decision I made,” she says as she looks back at that day more than 15 years ago. “They showed me that it was nothing that I did. I didn’t put my son in jail or in prison. It was his choices.” Roll’s story is played out over and over with thousands of Kairos Outside “Guests”, women with incarcerated loved ones who attend retreats designed to help them find peace, mend relationships and support their loved ones on the inside. The retreat weekends are different than those for Kairos Inside (incarcerated men and women) or Torch (incarcerated youth) because they meet outside of the prison setting, in hotels, camps and retreat centers. Plus, former women inmates are also welcome.

“Kairos Outside teams really have to work to get guests – they don’t have the ‘captive’ audience that Kairos Inside and Kairos Torch have,” says Brockmeyer. “Once guests are recruited, they don’t always come. There is a 50% attrition rate because the women have so much going on in their lives.” She notes, “Many of these women have isolated themselves and don’t trust many people.”

Amber Davidson can relate. She had done three years jail time and, up to that point, her life experience did not inspire trust. “It was a little intimidating and scary,” acknowledges Davidson about her arrival at the retreat. She had learned about Kairos through her fiancée, James, who had participated in a Kairos Inside weekend and was eager for her to share in the experience. The couple met before either of them had done any time. Davidson grew up in foster homes after she and her sister were removed from her mother’s care. “We both (she and James) just lived lifestyles that were not very good. I was raised basically in the streets, fell into drugs and doing things like that,” she admits. “I was never really taught anything different. My mom didn’t even send us to school. I was a product of my environment. I didn’t know how to go into society.”

She had learned to fend for herself and become fiercely independent. Now, she was welcomed in an unfamiliar fashion. “It’s difficult to have a bunch of women want to carry your bags, make your bed and tend to you. I was a little standoffish,” said Davidson. She almost left. “One thing led to another and God allowed the situation to bloom,” she added. “Then I met some really great women that I kept in contact with, stay in fellowship with and we travel together now. We’re even doing other services for God together, so it was a blessing.”

The turning point was a witness of love and humility. “It changed my mindset to see these women be humble enough to ask for forgiveness and advice. To see leaders stand up and do that – that was a sign….”

Since then, Davidson happily reports, “(God) cleaned up my whole family. We all started doing the right things together. We had to work out those inner demons, those old character flaws… And then God brought us back together as a whole.”

She says “reunions” and Share Witness Accountability and Prayer groups (SWAP) are a great help. “(Kairos) helps me find kingdom purpose,” she notes. “I work 50 hours a week and go to two college courses in order to give my daughter what I never had. There are things we have to do to live a good life. Kairos has given me a place where I can learn my gifts of ministry and work those things out.”
It also helps her continue to support James, whose life sentence was recently reduced. Davidson believes his prayers over her and Kairos (Inside and Outside) made the difference for them. She now works in various prison ministries and will be part of the October retreat team in Ocala along with Laura Roll.

For Roll, now a parishioner at St. Hubert of the Forest Mission in Astor, Kairos Outside continues to be a font of hope and strength. “Kairos has given me so much joy in helping other women find their way back to God. We cross all ecumenical boarders… We all believe it is God’s weekend to bring these women to a place of peace in their lives, amidst all this chaos. In one weekend they find that peace and are ready to go back into the chaos of the real world, better equipped because they are not alone.”

One Comment on “Inside Out: Transforming Lives Through Love”