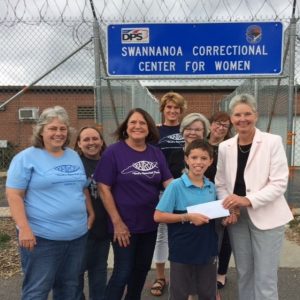 On Monday, October 7, 2019 representatives from Kairos Prison Ministry along with staff from Swannanoa Correctional Center for Women in North Carolina including Warden Denise Jackson met with a very special young man named Oliver Lytle, in order to accept a sizable donation to the Kairos program. Kairos volunteers had just completed their third Kairos Weekend at SCCW on Sunday, October 6, and were thrilled with the effort and support shown to the program from this selfless young man who demonstrated what community truly is.

Oliver Lytle, who is twelve years old, attends St. Eugene’s Catholic Church in North Carolina. In August, the Kairos of Swannanoa Women’s Inside team setup an outreach table at the church, and Oliver stopped by as he was unfamiliar with Kairos. He wanted to help and was given a medicine bottle with a Kairos label to fill with quarters. When the Swannanoa team returned to the church a month later, Oliver had filled the medicine bottle, but he wasn’t ready to stop there. He decided to raise funds for Kairos by fundraising at his church, school, karate class, and physical therapist’s office. As part of his black belt test, Oliver had to write a paper and do a service project and chose to do it on Kairos. With these combined efforts he was able to raise almost three hundred dollars for the Kairos Weekend! In addition to the funds raised, Oliver asked members of the St. Eugene congregation to sign agape, sign up for prayer coverage, and gave out applications to attend the closing ceremony.

As Oliver presented the funds to the Kairos treasurer, accompanied by his parents Rich and Kelly Lytle, he was thanked for the generous gift on behalf of Kairos and the SCCW residents. He was also presented with a Kairos t-shirt and a small cross commemorating the day, and had several photos taken with the group. While Oliver could not enter the prison, Warden Jackson told the Kairos Participants of Oliver’s efforts and they were so touched that after the Weekend they made him a thank you poster.

We look forward to Oliver’s support and generosity for Kairos throughout the year.