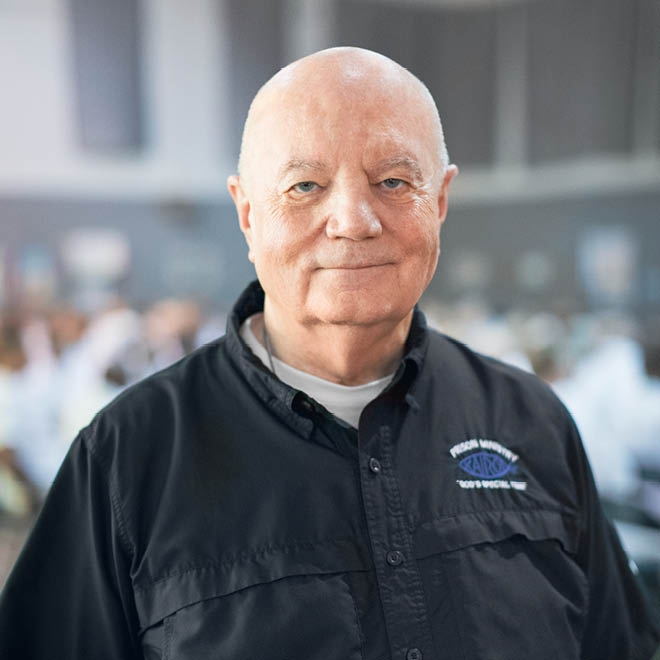 The inmates at the Michael Unit maximum-security prison prayed for a miracle.

To many of the inmates at the Mark W. Michael Unit maximum-security prison, Wayne Edson is known as the man with the miracle story.

A certified volunteer chaplain, Wayne has been serving four years with Kairos Prison Ministry, a nonprofit organization that provides Bible-based resources and support to inmates and their families. He makes weekly visits to the prison in Tennessee Colony, just two hours outside Dallas. The prison houses more than 3,000 inmates, most of whom are serving long-term or life sentences. He builds relationships, shares the gospel, teaches a 12–step “Overcomers” recovery program, and gives hope to men who’ve been forgotten and condemned. The purpose is to build a church inside the prison where men can unite and find freedom in a place where none exists.

“We have a community right now inside the Michael Unit of about 400 men that come together,” Wayne says. “We don’t come in to be the leaders of the church, we come in to build the church and to oversee it.”

One of the prison ministry’s most life-transforming events is the biannual Kairos or “God’s special time” evangelism weekend that includes three and a half days of fellowship, ministry, and homemade meals for 42 inmates selected by the warden and chaplain. Rexann, Wayne’s wife of 51 years who serves alongside him on the support team, says the harvest is ready— 99% of the men make either a first-time commitment to Christ or a recommitment by the close of the event. Even rival gang leaders from some of the most violent street gangs in America have broken barriers and become brothers in Christ.

“We saw a leader of the Crips completely broken down by the Holy Spirit—he was just reaching out to God—and a leader of the Bloods came over and prayed with him,” Wayne says. “It was amazing to be able to witness something like that.”

But miracle moments like these aren’t reserved for the inmates. In September 2014, a few months after he began volunteering at the prison, Wayne was diagnosed with squamous cell carcinoma, a common form of skin cancer, on the top of his head. It was his second skin cancer diagnosis and although his doctor urged him to have immediate surgery, Wayne wanted to wait. He was scheduled for another Kairos Weekend at the prison the following month, and he didn’t want “a big hole in his head” from the surgery to be a distraction while he was there. Wayne postponed the surgery and attended the event where he had the opportunity to share Jesus with a group of six inmates for more than three days straight. When he drove home after the final meeting, his heart was troubled.

“I was wrestling with the Holy Spirit, and He was asking me, ‘Why did you not tell those men you need prayer?’” he says.

Wayne wasn’t sure why he’d kept secret his skin cancer and upcoming surgery—maybe it was pride. As soon as he got home he decided to apologize to each one of the six inmates from his group telling them everything. When he returned to the prison two weeks later, word had traveled, and hundreds knew about his surgery. Before he left to go home, a dozen or so of the inmates gathered around him, anointed him with oil, and prayed for his healing.

Wayne’s surgery was scheduled for the early morning of November 18, 2014. Right before the surgery, his doctor noticed something didn’t look right, so he ordered another biopsy. Wayne waited 45 minutes for the doctor to return—he was getting nervous.

“The minute I saw the nurse, Satan was telling me, ‘Prayer doesn’t work, they’re bringing you back, and they’re going to do this surgery,’” he says.

Then, he felt the peace of God drown out the enemy’s words. He and Rexann were overwhelmed by what they heard next.

“The doctor came in and said, ‘Mr. Edson, I don’t know how to explain this, but there is no cancer so we’re going to send you home,’” he says.

Wayne shared with his doctor that the men at the Michael Unit had prayed for his healing. Both the doctor and the nurse were stunned. They couldn’t believe Wayne had men in prison lay their hands on him and pray. But it was confirmed—there was “zero cancer.” In awe, his doctor responded, “You tell those men that prayer works.”

Wayne was happy to oblige—he was going to the prison’s Prayer and Share service later that day. He knew his testimony was not just for him and his family but for every one of those men. That evening, he ended up sharing his healing story with more than 200 of them.

“I had a stocking cap on, I pulled it off, and said, ‘You see this bandage? This is not cancer—this is God’s miracle from you guys,’” he says.

After the service, a young man who was serving a 25-year sentence asked Wayne if he’d been told that he’d been praying for him days before the surgery. The young man told him he was praying for Wayne and declaring Wayne healed just like the woman who touched the hem of Jesus’ garment in the Gospel of Mark. He also wrote that Wayne would give God the glory for his healing and tell the doctors and nurses about it.

“Everything he said actually happened,” Wayne says. “On the 18th I told the doctor and the nurse, and then I went and gave testimony of the event to 200+ men in the prison that night.”

Rexann says Wayne’s healing is pointing men to Jesus and giving them a sense of purpose, even though they’re behind bars.

“It speaks to the prisoner that, ‘With Christ in my life, I can change, and I can also affect change in other people,’ because He gives them confidence to pray for people and be a minister where they are,” she says.

Wayne continues to share his testimony every chance he gets, especially with the men at the Michael Unit.

“I tell them, ‘It was your fellow brothers in Christ that laid hands on me and prayed for me to be healed,’” he says. “‘Be encouraged, God hears your prayers.’”